I’ve been meaning to make posts about travel memories for several months now, and for a theme, it came down to either people or food. I knew I’d eventually talk about both, but for a long while, I couldn’t make up my mind what to post first. However, since I greatly prefer food to people, let’s go with that. So here you have my Top 6 Food-Related Travel Memories!

London, England → The sandwiches you get practically everywhere are one of my favourite things about this city. I always get them with tuna and whatever else is on them (used to be sweet corn, now it’s often cucumber), and they’re always delicious. My mother loves them, even the boyfriend liked them loads. I, err, may or may not make them a staple whenever I’m over there.

anywhere, Italy → Pizza. Seriously. I could easily make this #1 of this list since I have some great memories of pizza, especially during the summers of my childhood when we’d always have it, maybe not every day, but close enough, in our little town in Lazio. I also have amazing memories of eating pizza in / near Venice, though, so it’s all a little too blurry to end up on the actual list. 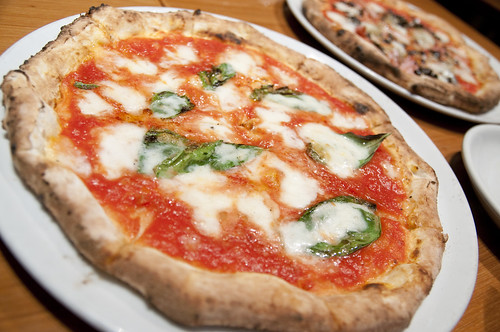 Greater Accra, Ghana → Pizza. Yes, you read that right. Authentic Italian pizza, not in Europe, no, but in the middle of Africa. To be fair, we hadn’t exactly had the best food experienced on our Ghana trip. Not that anything we had was bad, but it was mostly rice and more rice and sometimes rice with spices. So when we found a little hotel near the coast in the travel guide that was said to serve ‘authentic pizza’, we knew we had to go. Best decision ever? Quite possibly. We ate more than our weight in pizza of all kinds, from simple margherita to spicy salame. Maybe it was the atmosphere (just a few minutes away from the beach, sitting amongst green bushes and flowers of all colours, with Italian and Spanish music playing in the background), maybe it was homesickness, or maybe the pizza really was that good, but I’ll never forget eating the best pizza I’ve had outside of Italy in a little place just outside of Accra, Ghana. 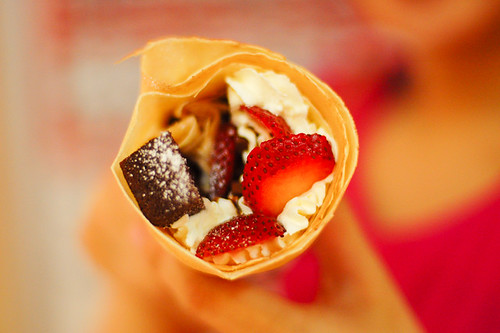 London, England → Crêpes from a shop at Hammersmith station. This was in 2006, when I spent a week in London with my mother and brothers. Our hotel was a few minutes away from Hammersmith station and didn’t provide breakfast, so we ended up at the crêpe place almost every morning. I think it was the same guy behind the counter every morning, too, and we ended up chatting to him quite a bit. He told us that he’d been to Germany a few years before, and that he’d stayed in Nuremberg. He even regaled us with a phrase or two in German. As for the crêpes… They were pretty damn good. I had the strawberries-and-whipped-cream one most mornings, and a savoury ham-and-cheese crêpe once. When I came back to London a few years later, I tried to find the shop again, checked all of Hammersmith station just in case I had forgotten the exact location, but sadly, it was gone. 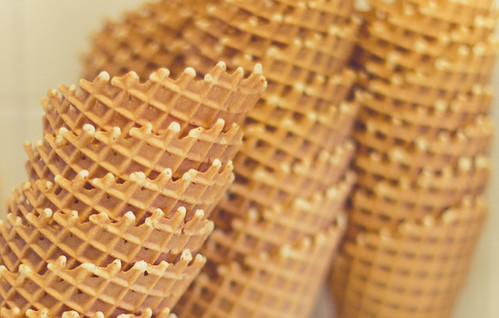 Lazio, Italy → Nutella ice cream. This sort of goes with the pizza that didn’t make the list because the ritual was that we’d have pizza for dinner, and then get ice cream for dessert. Or sometimes, we’d eat at home, but we’d still go into town to get ice cream afterwards. Just because. And there was this place, located in a sort of old castle, that sold Nutella ice cream. (I believe it still does, but I haven’t been down in Lazio in the last decade, oh my god. That needs to change.) It wasn’t ice cream made from Nutella, as you might think just reading the name. It was simple panna ice cream with this very faint milky flavour. Very cold, obviously, and only when somebody ordered it would it be mixed with a spoonful or five of non-refrigerated (and thus more or less liquid) Nutella. Sounds delicious, doesn’t it? It’s even better than you think. But all that still doesn’t really qualify for a ‘travel’ memory. Except! Except that one summer, I went to Italy with my father and grandmother rather than with my father, my mum, and my brother, and because my brother had stayed at home, I had to let him live vicariously through me by eating his ice cream, too. Every day, naturally. So one summer, I got two portions of Nutella ice cream every day for a whole three weeks. As time went on, I outgrew the Nutella ice cream and instead moved on to granita (lemon, mmmmmm!), but I’ll never forget that summer. 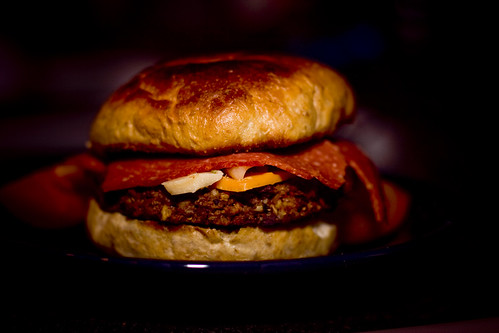 Dar es Salaam, Tanzania → Veggie burgers. It was my 23rd birthday, I was pretty homesick (first birthday away from home and all that), we weren’t yet on Zanzibar like I’d hoped, and the campsite we’d started the day off in had been horrible. But the food in the evening was amazing. My friend Kate and I were on an overlanding tour, which means we cooked our own food every day. The cook group responsible for that particular day had made burgers, and since I was the only vegetarian in the group, there were a few veggie burgers, too. Now, I’m not a ‘real’ vegetarian, or whatever you want to call it. I do eat meat occasionally, usually just chicken and fish, but I’ve been known to wolf down a burger once in a while. So I wouldn’t have minded eating the regular burgers like the rest of the group, but the cook group made an effort to get me veggie burgers. I had actually never had any before (or since), so I don’t have anything to compare them to, but they were amazing. Homesickness? Instantly gone. The awful campsite? A distant memory. Zanzibar? Eh, would still be there tomorrow. Birthday? Made. 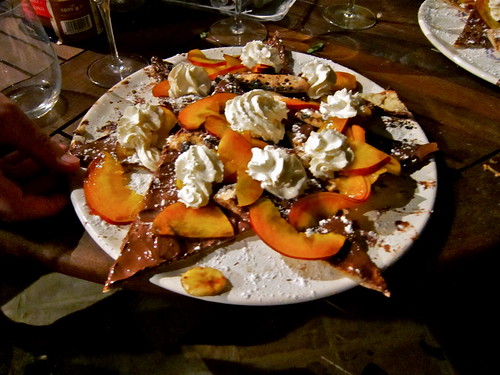 Zanzibar, Tanzania → Nutella ‘pizza’. Another overlanding memory, this one. Zanzibar had been as beautiful as I had hoped, but I hadn’t been able to enjoy much of it thanks to the awful side effects of my malaria pills. By the time our last night on the island rolled around, I couldn’t keep anything down and wasn’t even trying much anymore. It was Ramadan, so pretty much everything was closed all day, but to make up for that, a giant food market opened in the market square every night. Sadly, it was pretty much all sea food (which I don’t like on a good day, let alone when I’m already sick), but there was this one booth that sold ‘Zanzibari pizza’, which turned out to be some sort of crêpe filled with mango or banana and topped with Nutella. Since I don’t particularly like mango or banana mixed with anything, I asked for just Nutella, and that was the only thing my stomach approved of. Everyone else was eating shrimp and lobster and fish, but I was so happy just to have my little Nutella crêpe, and that’s how we spent a big part of the evening, just eating and looking out over the sea. 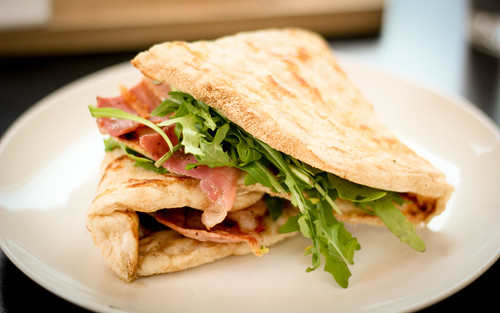 Rimini, Italy → Piadine. Most of you have probably never heard of piadine, even though they’re nearly as delicious as pizza, and probably just as versatile. You can have them with cheese or without, with salame, with ham, with Nutella, with anything, really. We had them with squacquerone (a soft kind of cheese), prosciutto di parma and rucola. Super simple, but so delicious. What makes this my favourite memory, though, is when, where, and most importantly why we had them. Despite having a fairly large family in Italy, I had only ever met a few of our Italian relatives, and that was when I was still little and couldn’t speak a lick of Italian. I still can’t, really, but I understand a damn lot, so when my father told me he was going to Italy to visit the family, I jumped at the chance to go with him. And instead of spending the entire trip hip-deep in panic attacks, I decided I wouldn’t even try to speak what little Italian I actively know. Instead, I used my father as an interpreter and just listened. And that particular day, things hadn’t exactly worked out; my father had planned on meeting his cousin (not really cousin, but this is Italy, everyone’s a cousin in Italy), but had forgotten to call him again before leaving home, and when he talked to him that day, we found out he would be in meetings all week. My father was pretty down after that until I made him call the sister of said cousin (so technically also (not) a cousin). They hadn’t seen each other in more years that I’ve been alive; that’s why I think my father was more than a little reluctant to just call her and be all ‘yo, we’re in the city right now, wanna meet up?’ But I insisted, and just half an hour after he’d called, we were on our way. Gabriella, the not-really-cousin’s-sister, told us under no uncertain terms that we had to come over. She even wanted to make us dinner, but we had already eaten. However, we can’t forget that this is Italy, and food is like air in Italy. So when we got there, after they talked for a bit, there was food, namely piadine. And, as perhaps the biggest surprise of the day, Maurizio, the not-really cousin, showed up, after all. It was a perfect evening and I laughed so much. (Language barrier? What language barrier?) I’ll forever be glad I decided to tag along, and not just because I have a favourite dish now. (I tried a spicy tomato piadina here in Berlin two months later, and it was still delicious, but, just as I had thought, a lot of what had made the piadina in Rimini was the company of not-really-family.)

Photos by Yuichi Sakuraba, Kervin Tran, Shandi-lee Cox, Zlatko Unger, Laissez Fare, Kim, all available under Creative Commons licenses that you can find by clicking the individual photos or links.