2017 was my first complete year of bullet journaling. It all started in August 2016, when my friend Michelle jumped on the bandwagon, and I seem to have a need to follow her into all creative pursuits (including nail art and adult colouring books). Those few months in 2016, I tried a lot of different layouts, but soon found out that I like my journal clean and without frills, and thus used the same layout throughout the entire year of 2017. That said, there were some spreads that I particularly liked, and I want to share those here (click for bigger size). 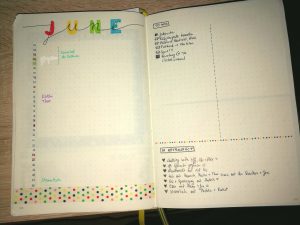 Colours! Dots! Minimalism! I admit, it’s a little empty (not much went on in June, apparently), but I like it so much I will probably make this year’s June layout exactly the same. 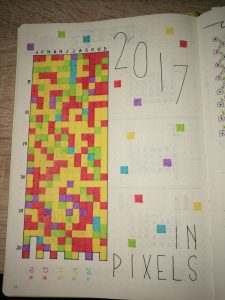 I totally stole this idea from someone on Instagram, though I don’t remember who. I really like tracking my overall mood throughout the whole year. And looking back, I can see that 2017 wasn’t that bad. I had more good days than bad (by far), and a whole lot of mediocre ones. There was a time at the beginning of July where I felt really awful, and two days in November when I had lumbago, but other than that, really bad days were few and far between. A good average, I’d say. 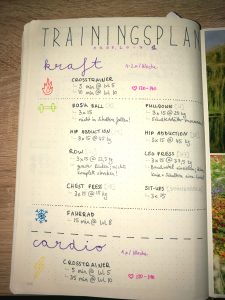 Admittedly, drawing isn’t my strong suit. Another reason why I prefer minimalism. But I think I managed to convey ‘warm-up’, ‘exercise’, ‘cool-down’ and ‘cardio’ fairly well. 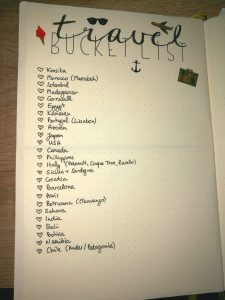 This one I’m really proud of. Look how pretty it is! I need a new set of travel-themed stickers, so I can make this year’s list just as pretty. And yes, it’ll be all the same places and more on the list. 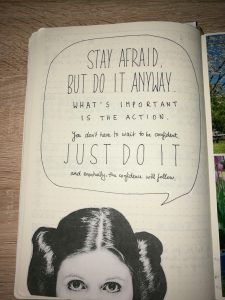 Everyone who knows me even a little knows how much I love the original Star Wars trilogy. And Princess Leia has been a role model of sorts to me for as long as I can remember. So I already knew I wanted something related to that in my journal when I came this Carrie Fisher quote, and it spoke to me on so many levels that I couldn’t not include it, especially since I still struggle with my social anxiety disorder every single day. I need something similar for this year, but I haven’t figured out what exactly I want yet. 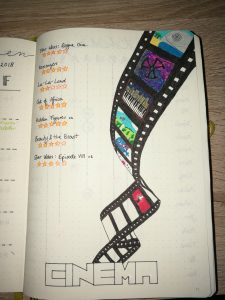 Further proof that I cannot draw to save my life. Feel free to laugh. 😉